While it’s not generally feasible to learn how to build an iOS app from scratch in one three-hour session, the aim of this crash course is to help you to take the existing Bluefruit LE app and modify it to collect data from any Arduino-compatible sensor.

How This Tutorial Works

For each feature that you add to the app, the subtasks are written out in English (pseudocode), but there are no code snippets in this tutorial. After you try it, let me know if code snippets would have helped you learn–I might add them later. If you find that you’re stuck and need some help, I pasted all the snippets into a file, which is linked at the end of the tutorial.

Before the crash course, be sure that you have

Download the source code for the Bluefruit LE app here. We will modify this code in three ways:

After you complete these modifications, your app should display a succession of new elements like those in the screenshots below. When interacting with the app, you are given the option to email your sensors values when you “Disconnect” from your sensor system. 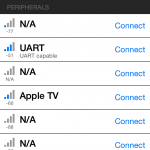 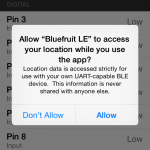 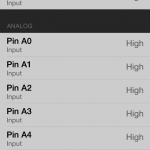 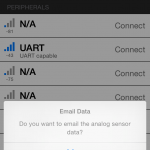 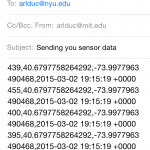 I found the location element to be the most complicated since it involves issues of user privacy and permissions, so we will save that part for last.

Step 1: Getting Acclimated in Swift

If you have never programmed for iOS in Objective-C, take this Apple tutorial to get acclimated to the iOS development environment with Objective-C. Now that Apple has introduced the Swift language to be simpler and less error prone than Objective-C, we’re starting to see more codebases written in Swift, including the Bluefruit LE app.

Swift, which has been called “Objective-C without C,” is meant to employ concepts and syntax closer to more modern languages like javascript or Ruby. It took me a day or so to get used to Swift syntax, and a few more days to understand the concepts of forced unwrapping / optional chaining (the reason you see so many “!” and “?” marks in Swift code), which is why I recommend the particular links below.

In the original Bluefruit code, the pin I/O values displayed without being stored, so our first coding task is to store those values in an array. The Swift Tutorial: How to use an Array in Swift may be helpful for this task. We will first focus on the existing class PinIOViewController, which manages the numeric display for each I/O pin. In the class’s file PinIOViewController.swift, see if you can complete these subtasks to write the data to an array.

Step 4: Adding Location and Time Data to the Mix

If you made it this far, congratulations! You are almost finished. If not, don’t despair, all the code is written out at the end!

Our final step is to add location and timestamp data to each sensor value. This means that we will now record a group of values for each sensor reading, not just one, so it makes sense to convert our sensorDataVal array from an array of Int to an array of a class we create: SensorRecord.

iOS offers a Core Location Framework to query location data based on the device’s built-in GPS, bluetooth, and wi-fi modules. Of this framework, we will include the CLLocation library in our previous Swift files, BLEMainViewController.swift and PinIOViewController.swift, as well as a new Swift file that we create called SensorRecord.swift.

Before you get started in this section, take a look at the Apple Sample Code Locate Me to see how the CLLocation library works. A new, improved privacy feature in iOS 8 is that all apps are programmatically required to request authorization from the user to employ Core Location services. You can read more about it in NSHipster’s post on Core Location in iOS 8. Also take a look at this StackOverflow discussion on Getting a very simple Swift CoreLocation example to work; it helps in culling relevant CoreLocation code into a few lines. After reviewing these resources, try these subtasks:

The working code snippets are in this file, but you will still need to figure out where in the pre-existing Bluefruit LE code you should paste these snippets. We will take a look at this file together in class. If you need to use this “cheat sheet” beyond class, use the code’s comments and blocks to help!

Secret Step If You Really Need It